8 jan. 2010
The interior of the 251 has been painted in it's basic colours. I did that by hand. The panels on the sides, the guncradle and several details were painted in dark yellow, using buff, white and beige mixed in in order to create a little variety. Since the vehicle is as good as new, weathering had to be kept to a minimum, making it harder to add life to it. I painted the seats in a mix of green and dark yellow, figuring that at this stage of the war leather would ne scarce and canvas was likely to be used.
I also added some washes with dark grey and black for the deep shades, but am, as always, unsatisfied with the results. The washes don't seem to flow as they should, leaving dark stains on the paint. Somehow acrylics do not flow as easily as enamels or oilpaint. 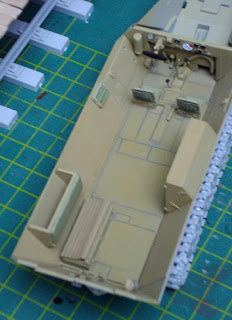 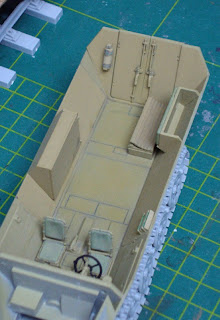 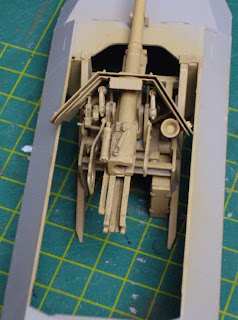 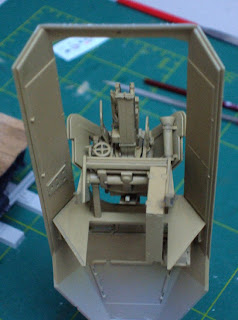 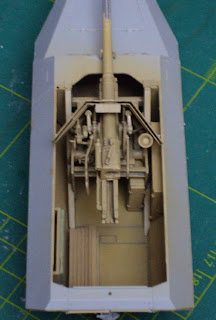 I want to add some amunitionboxes in order to liven up the interior and to break the monotonous yellow.. Since it's supposed to be a new vehicle, cramming it with gear is not an option.

10 jan. 2010
The vehicle will have to wait for now. I ordered some things to do the exterior.
I have to reposition the barrelcradle, too.  Thanks to Dragon's unclear instructions and my failure to check my references I positioned it wrongly. Several of the parts attached to the gunshiled will have to be removed again, since these appearantly were only used on PaK's on an undercarriage. I also have to fix the visor at the codriver's side. There's supposed to be an attached plate instead of a visor.
So I'll be busy.... and I did not even mention the fit of the kit!!! 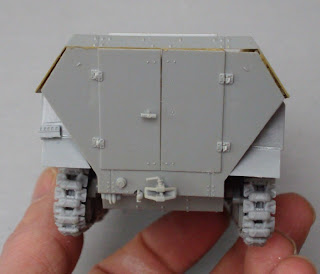 This time i turned my attention to the base. After a first desastrous attempt, this is my second one; 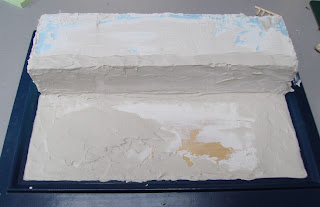 Basically very simple, but there is a catch; The loadingplatform has to have the same height as the railwaycar... That ment additional filling. The used plaster had to be chipped off, some more wood and foam was added and in the meantime the large foamblock decided to part with its wooden base, too... Just to give you an idea of how it is supposed to become; 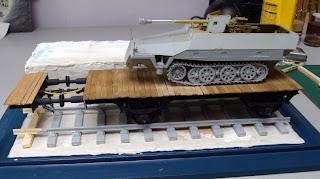 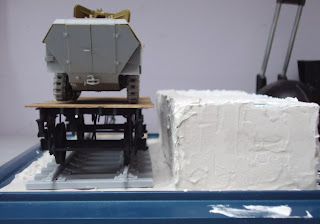 and with a pole to the rear in order to add some height. 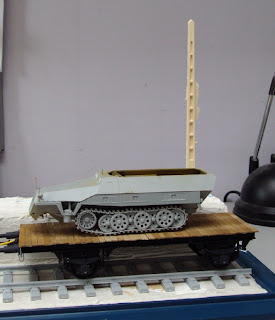 The loadingarea next to the pole will have some boxes and crates and to the left the Russkis will be placed.

After some reactions on the Twenotforum regarding the railcar it turned out I had forgotten something. Something vital; on the images shared it was quit clear that railcarssides always showed up a metal side. Does this mean I'll have to tear up the wooden boards again?? And how am I going to fix that all???
Back to the drawingboard! 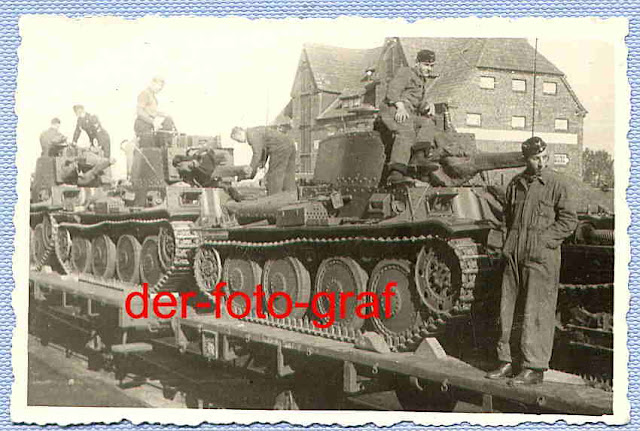 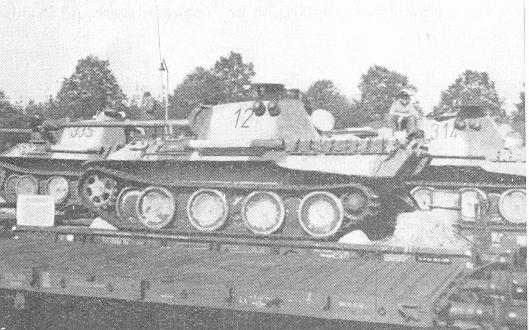 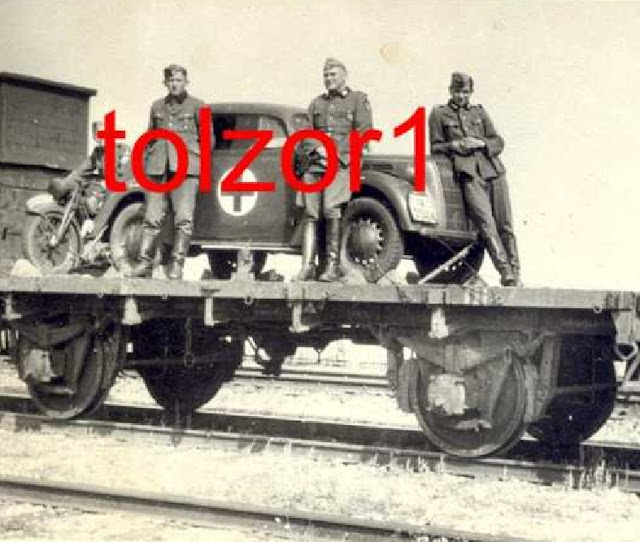 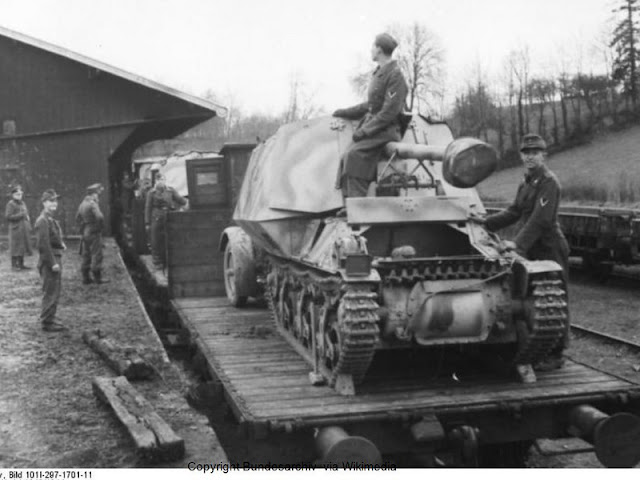 Well, after giving it some thought and dreading of ripping apart the railcar, I came up with a solution. I'll cheat!! And that proved to be relatively easy, too. How? Simple, by adding to long strips of styrenesheet to the side and then add a narrow strip on top, creating an L-shape. This approach had 2 advantages; 1) the uneven sides were hiden and became nice and straight and 2) the cyanoacrylateglue had more surface to stick to the wood.
Result; 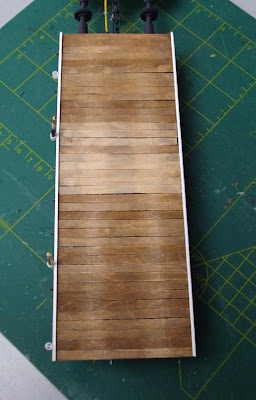 And while I was tinkering, I added details to the sides, such as rings and poles. 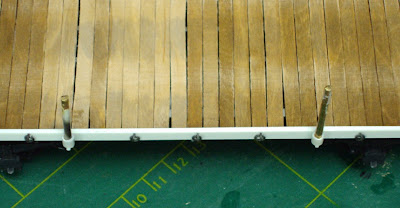 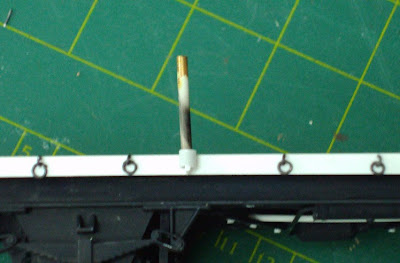 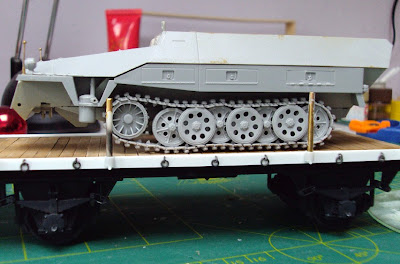