The 251 is nearing the point of completion.
I added a hood, which I got from a fellowmodeller on Twenot as well as the tip how to fasten that. The tracks and frontwheels are in place as are the decals. These are kept to a minimum, just the licenseplates. The pictures of the real deal only showed vehiclenumbers, but none had divisional or tactical signs, so I skipped those.
I have started lini ng in the deeper shades, using the soapmethod to break the surfacetension of the water. Works a lot easier now. The vehicle also has had it first wash in raw umber, making it look just a tad grittier. The coarse structure of the paint shows better now, just not on pictures. 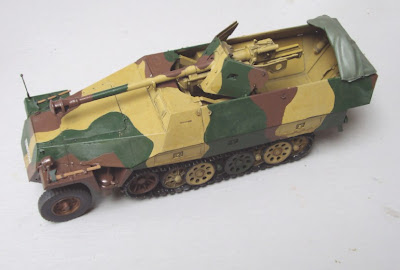 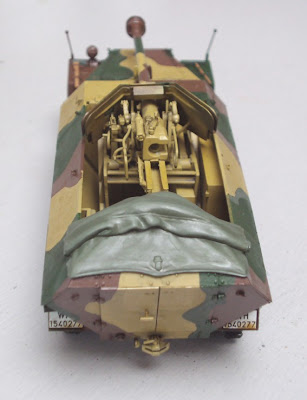 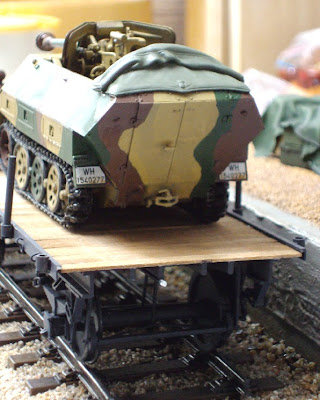 I went on with the base, adding washes of black, a dirty grey and brown to both railbed and wall.The top of the rails were done with gunmetal and I painted the edges of the base. The colour turned out to be a lot more intense than anticipated!!! It does stand out this way, though..... 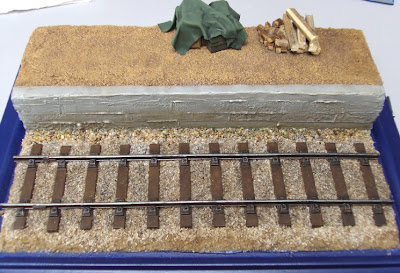 And we go on and on.....
What a way to spend a saturdaynight and a drizzly sunday. What did I do?
1) I added a rough structure on the concrete pole, a lamp, a fuse- and telephonebox and wiring
2) finished the raketenwerfer
3) added decals, washes and pastelpowders to the railcar
4) railbed got the same colours of pastelpowders
5) added washes and powder to the 251

1) As said I worked on the concrete pole. This looked like a small disaster, when I started it. The moulds missaligned when it was made, leaving a very prominent seam. There was also a lot of flash. Looked like a flag at one point! And as icing on the cake it completely lacked any form of structure you might expect on a concrete pole. Smooth as a bab's butt.
Upside; I could sand it and apply filler as much as I wanted to. I used thick acrylic paint and dabbed that with a stiff, shorthaired brush onto the surface. 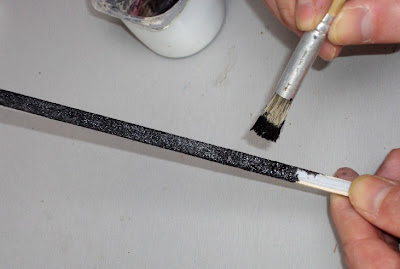 Then I made a lamp and added a wire. The base looked very empty, so I made the fuse- and telephonebox. This box is a modified 40mm grenadebox, from the same stash of dubious quality boxes as the ones I used on the loading platform. 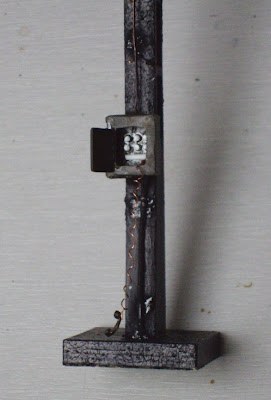 After the first layer of "concretegrey" it looked like this; 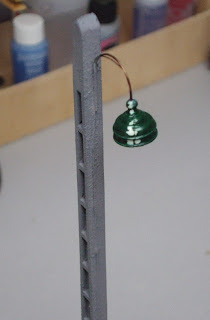 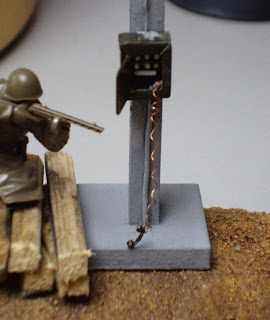 After this I turned my attention to the railcar and rails, again.
I decided 2 grey cars were boring, so repainted the short section again. Next step would be to add the decals, but that was a disaster! The ironsidedecals simply fell apart, when handling them! They're to big too, by at least 1mm.... which is a lot if you only have about 6mm of room.
Finally I added more drybrushing with gunmetal and rust and washes with greys, browns and rustcolours. 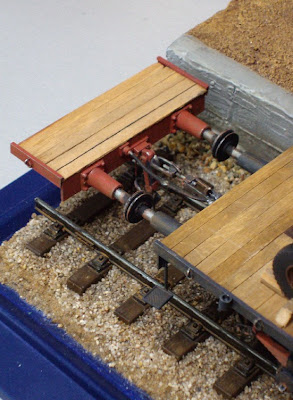 When all this had dried, I applied a lot of pastelpowders to it all.
First of all I ground up a brickred piece of chalk and that was applied around the attachmentpoints of the rails. After that I did the same with a lighter reddsihbrown variety.
Then I glued the railcar to the rails.
The raketenwerfer also got its share of washes and powders and was fixed in place, too.
The 251 got powdered in a licht greyish brown, blending the colours more and toning them down. 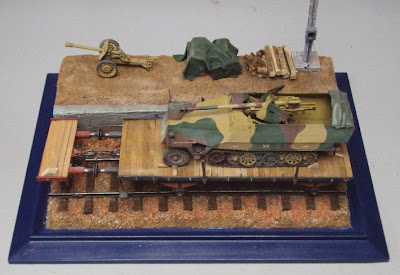 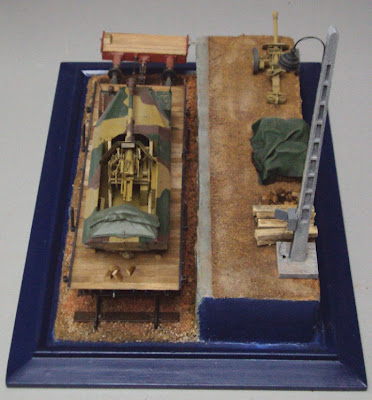