Here's my latest build. It is Dragon's Sd.fz.251/22, combined with an Ironside traincarriage and Tamiy's old Russian infantry. When I picked the 251 up, back in 2010, it had been sitting in a box for a while, already. I'll just post it in the same order as I did on twenot.nl, but I'll translate it, too.

door Ron van Wiggen
2 jan, 2010
Well.... here's one of my new yearresolutions for 2010; finishing old projects.
One of them is a Sd.Kfz.251/22.
Scenario; This vehicle is sitting on a railcar, ready for stranport to the eastern front, but the Sovjets got there first.
When I picked this up it looked like this; 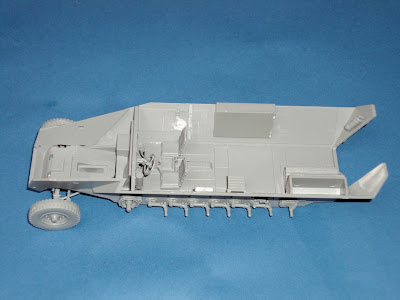 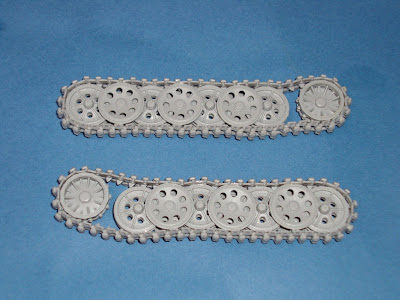 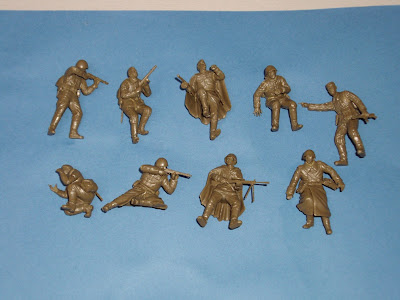 This is the general idea I had in mind; 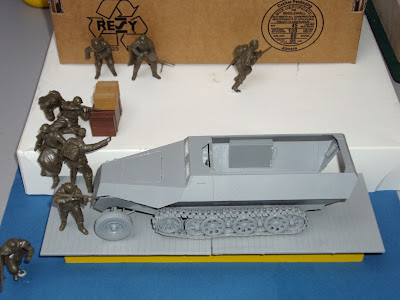 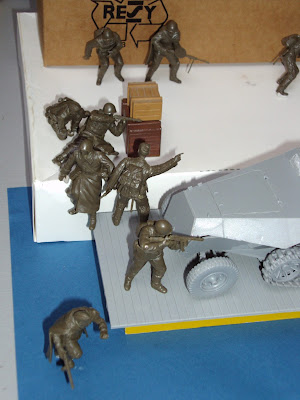 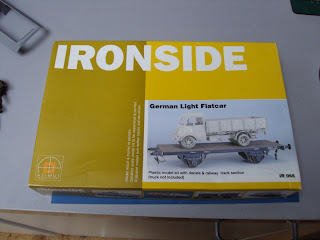 And that one is the first thing I'm going to tackle. The undercarriage is actually the one from a G10 freightwagon. The kit itself is far from great; lots of flash, misaligned molds en the parts do not fir properly. There are also some brakes provided, but the systems linked to them are completely missing. After I "threw" the wagon together I scratchbuilt those systems.
First the basics; in order to make it look like this wagon was part of a train, I cut off one end of the wagon and glued that to the other end. This way I also had the opportunity to build the connectingsystem and hoses. As you can see, the provided rails were to short and I had to add another piece. 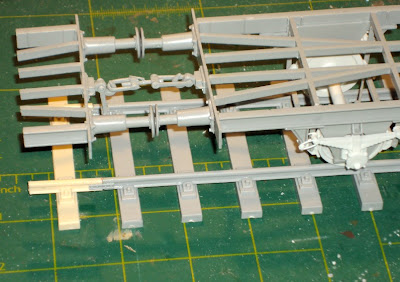 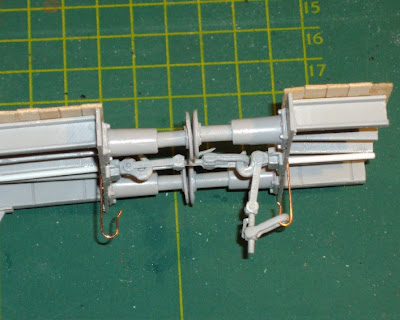 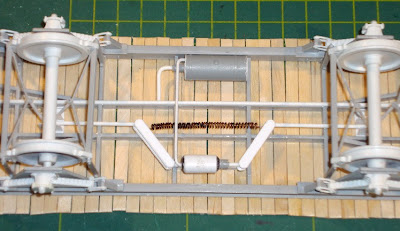 The brakes couldn't just float in thin air, so they needed to be attached to the brakingsystem; 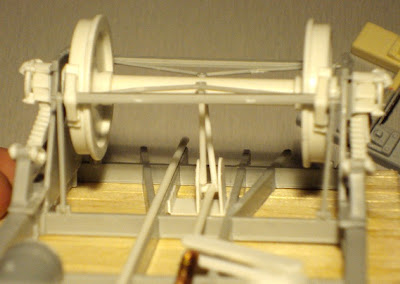 And while I was at it, I replaced those hopeless floors for real wooden ones;

These drawings are part of the references I found 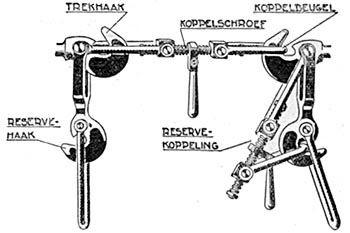 4 jan, 2010
The next steps;
I made the hydraulic emergencybreaksystem, gave the wooden floor some washes and started painting the frame. What a misery! Ironside's plastic does not like paint! There was absolutely no adhesion. Also those little nooks and crannies made painting a difficult job. At first I went for a green colour for the short part and darkgrey for the long one. Somehow that didn't look right, so I ended up with 2 darkgrey carriages in various stages of weathering.
Another problem I encountered was the wood. Wood+water/paint=warping wood... I tried to fix that but cutting and sanding them, but I ended up with planks coming loose from the frame. 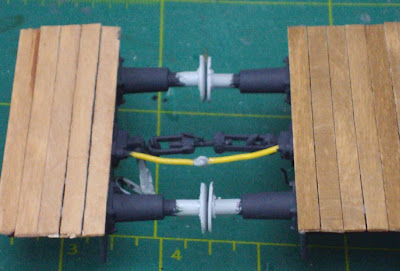 again a few small steps.
After the undercarriage had received oit's main colours, I turned my attention to the wooden boards. I gave them a few thinwashes with grey, leaving 2 driving tracks bare. I slightly sanded those, to give the wood a worn look.

I also took care of some forgotten, but vital connections in the brakesystem and replaced that awefull looking spring. For the looks I added some axle-ends. 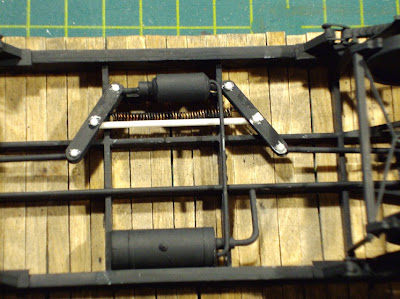 I started work on the halftrack, too. I don't know what I thought I was doing when I built this, but I most certainly did not pay attention!
I had to remove the breachblock and reassemble it, since I placed it upsidedown. The rearpart of the vehiclebody was misaligned en the guncradle had been poorly assembled as well. The backdoors were glued in an open position, but had broken off. Now I closed them, but needed to reposition the handles for that. The same goes for the stowagebin on the rightfront. The frontaxle hovered about 5mm above the ground!
A lot of reworking to be done.... 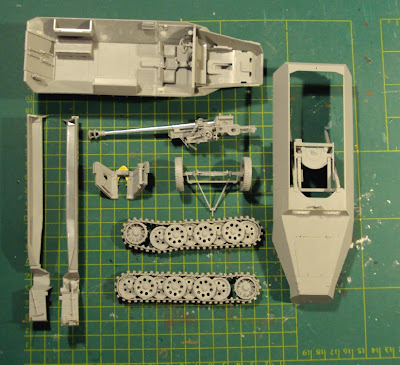