In the last week of may this year, I turned my attention to the DKW and rider, instead of the halftrack, just as a little change of pace, so to speak. 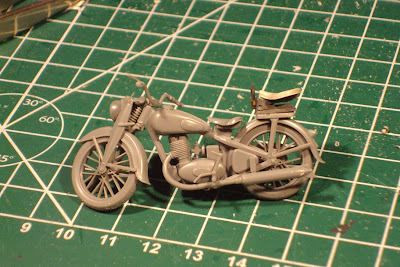 The first thing I did was take care of the bike; 10 minutes of work including the clean up! Some very clever designing by Tamiya. During that I noticed something; there was a ring behind the rider's seat, something that did not show up on pictures of an original DKW. Crossreferencing should the DKW in the picture has a much bigger "butt" than its cousins. I thought I recognised the passengerseat of a BMW or Zündapp 750! So out came the saw and the sparesbox....
I also need to add some more bits and pieces, like the gearshifting rods and cables. I took away the front numberplant too. 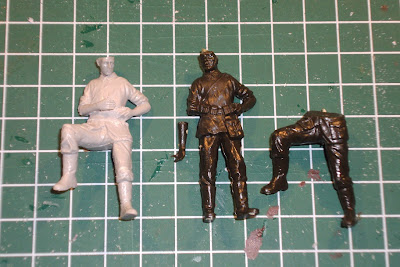 Next was the rider. As a basis I took 2 old Italeri figures, since those showed the correct features I needed; camouflagesmock, rolled up sleeves and high boots with normal pants.
I took the legs from one figure and the torso from the other. Some old fashioned sawing, sanding and glueing of the joints and a new Dragonhead.
The figure is supposed to show a rider in the proces of putting away the written orders into a pouch. 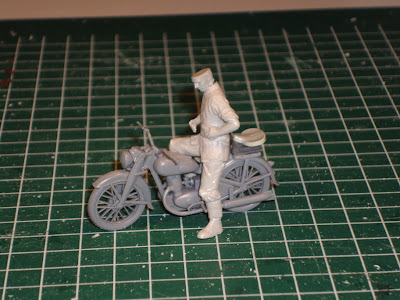 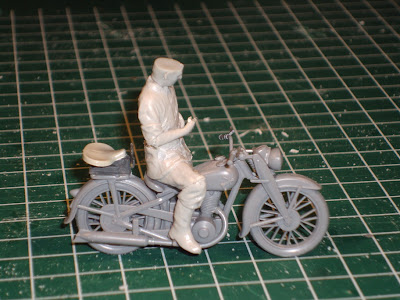 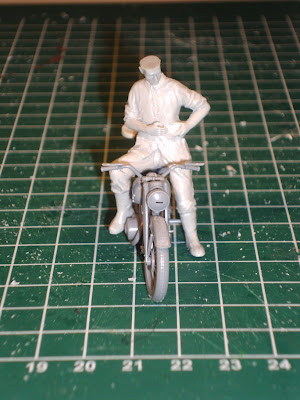 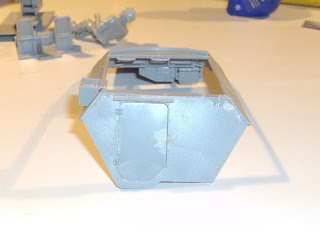 Right now I am continueing with the build. The absolute wonderfull weather this spring has caused a lot of outdoortime, including a lot of work in the garden and in firewoodpreparation and -storage....
I have been busy trying to realign the rear of the superstructure. With some pushing and pulling, some twisting and glueing, this is the result; 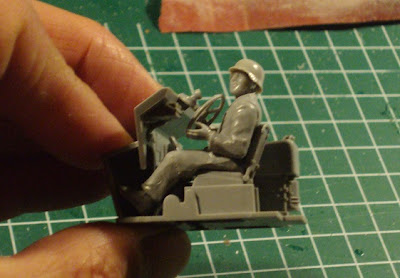 Many of the subassemblies are done, including the driver's section. Now i could focus my attention on that figure too.
While working of the figure I could not help but wonder how these guys in those days were able to fit in that position, let alone operate a vehicle??? 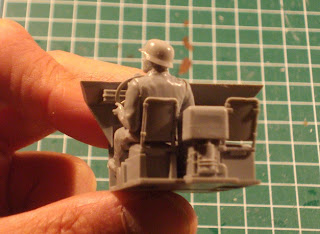 Even the midgetlike figure Dragon provides could not ne squeezed in!


I had to alter the angle of the legs, sand off his shoesoles, alter the position and angle of arms and hands en trim off even more of his allready flimsy butt. The head needed some pushing down as did the helmet. Next I had to sand several parts of trousers and arms in order to make them fit several of the surfaces of the vehicle. 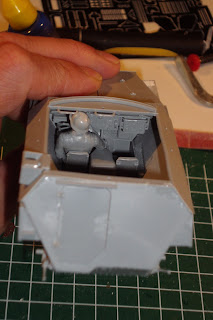 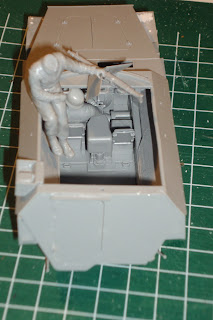 And in this small square of free room I need to fit a seat with pole + scissor binoculars (Scherenfernrohr), 2 standing figures and a lot of details....