So today was the day; I had to finally start applying some paint to this panzer.
It has been some years since I used the airbrush, so I was a little apprehensive to get going.
I tried some carspray-primer, the one you get in those spraycans, but was a little dubious about it. So I tried it on a piece of table first. Good thing I did! It dried up way to rough. Looked like small goosebumps.
I had no other primers, so I figured I might as well use regular Tamiyapaint as such and I went for  Tamiya's Red Brown XF-64. This way I'd have a preshade in one go....hopefully...
The conditions in which I had to work, are best desctibed as "minimal" or even "spartan". A plank across the woodbin in the heaterroom lit by a single 40W lamp would have to do.
While preparing for this paintingsession I came across a box I had long forgotten; a brandnew airbrush!! Bought some 4 years ago it got hidden and forgotten in movingboxes and other places. Had it in my hands once or twice, but never bothered looking closer... 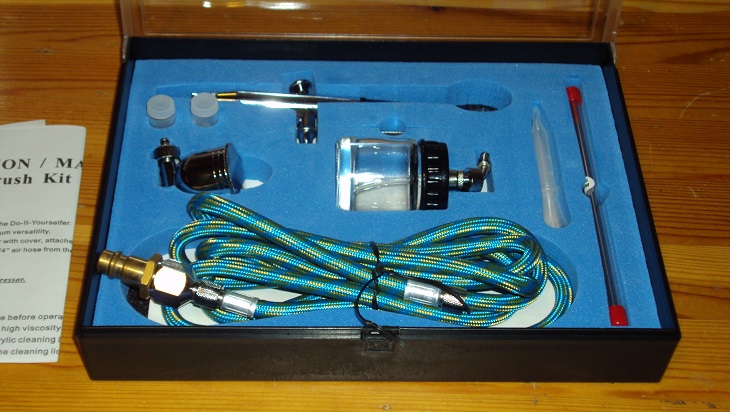 Well, the panzer is brown now.
I'll leave it to dry for 24 hrs, before applying the next coat: panzeryellow, which will be followed by a clear semigloss coat and some filters and pinwashes, another coat of clear, then white paint, gloss clear, decals, washes and finally a coat of clear matt. 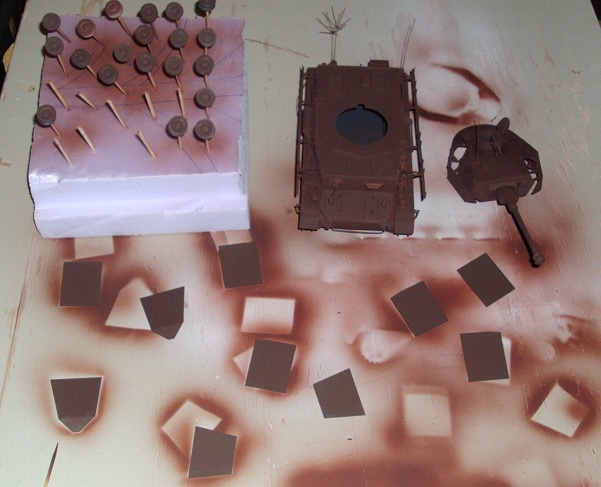