So....
It is time to give this panzer a base to reside on and a snowy one at that.
In the previous post you could see that I made the very basic shape of the base using a photoframe and some blocks of buildingfoam. With that I filled out the area where the groundwork would be, both horizontally and vertically. After that I applied the groundwork using filler, thus creating the surface with differences in height and angle. I wanted the tank to be visible from a left upper angle, in order to avoid a white mass (the armorplates) facing the viewer. This way the view would be more interesting...hopefully. 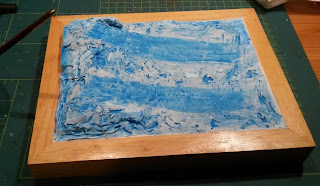 After the filler had dried, but not completely hardened, I applied light blue washes. The blue would give depth to the snowlayer on top of it, or so I was thinking

The next step is a crucial one; making the snow! 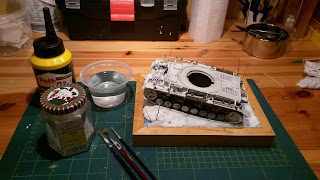 For that I used diluted white glue; ratio roughly 1:1 and to that I added backingsoda and mixed untill I had a yoghurt-like substance. That is the basic mix. For building up snow I use more powder in the mix and for smoothing it out and getting a nice, flowing surface I add more water. The previous is used for making the snow that accumulates on the runninggear and the latter is also used for building up snow on the upper areas of the tank.
Just think how snow gathers in certain areas and do the same. It builds up in corners, nooks and crannies, but really sticks together where it gets compacted by movement. It will not (likely) stick to rubber, but easily on recessed metal surfaces.
This mixture is very easy to make and very easy to use, because you can very easily correct mistakes by manipulating the surface. Did it get too uneven? Just gently start tapping it untill the waters comes to the surface and it will level out. Bit like quicksand, really. Applied to much on one place? Simply scrape it off and use a wet brush to make it smooth again or do the a fore mentioned.
One pitfall to avoid is to build up layers that are very thick. Remember it is backingsoda and it does have another use... making loafs of bread airy.... It bubbles, meaning it tends to create gasses (chemical reaction to the water and warmth). 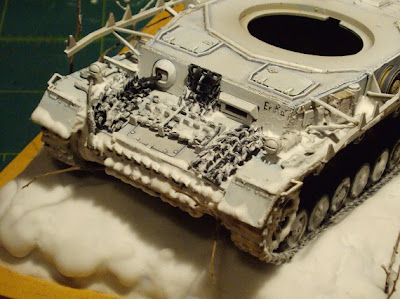 I tried to recreate deep snow by building up layers next to the tank and pushing those towards the tracks, but not onto them! Let the layers harden in between, before adding another one. 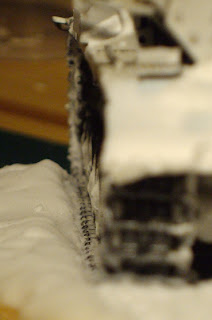 The final details arrived today; better jerrycans! A gift from a guy at the Twenot-forum. He felt that it would do the build no justice, using old, less detailed cans, so he sent me these. In hindsight I feel he was right.
I added a copper tiedown coming from the sparesbox. The whole (jerrycans and tiedowns) are one, including the loops, so I can take everything off, paint it and put it back in again. 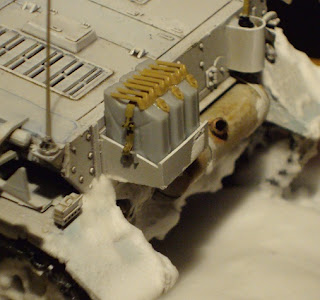