The story:
The year is 2031 and little over 5 years ago the often ridiculed and laughed at theory of peak oil and its aftermath have become a grim reality. Cheap fossil fuel production and supplies have virtually ceased to exist and as a result global logistics, economies and the production of food and products have collapsed. Shortages of clothing, food and fuel quickly had the modern world in a stranglehold, forcing all but the largest, wealthiest and most ruthless of institutions to their knees. Ever expanding and intensifying social unrests and upheavals were commonplace, contributing in the total collapse of the world's social structures. In many places anarchy or even civil wars broke out and governments the world over were absolutely unable to gain any form of control, which made the already minimal trust of the public in governments, vanish for good.
It was in this era that those large corporations stepped forward and openly seized control over all branches of government and because law enforcement and the military were equally involved and divided by the unrests, they deemed unreliable and thus were disbanded. As a substitute to safeguard their interests and properties the major corporations created their own armed forces; corporate peacekeepers.
Recruited at random these troops were nothing more than hired guns, mercenaries. Men and women with low social standards or a desperate disposition, paid to mercilessly do their master's bidding. They were issued with military surplus and left to their own devices to supplement their own equipment. Due to all the shortages, hitech wasn't going to save the day, since that depended totally on the access to cheap and plentiful energy.

The idea behind the figure;
It is a brutal, small, scrawny man, underfed, malnutritioned, bitter and hard, but kept functioning by being issued with a daily supply of synthetic food supplements to enhance his otherwise meager diet...

The actual figure is from Grey matter figures and later turned out to be app. 100mm high. Too small to be a real 1:16 figure, but I found the overall look quite interesting. Level of detail is good as is the casting quality, but I will (hopefully) enhance the overall appearance by adding more or adapting details. 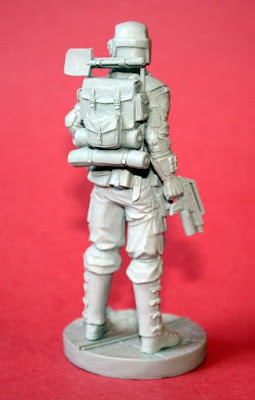 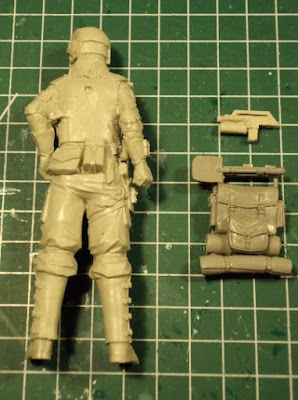 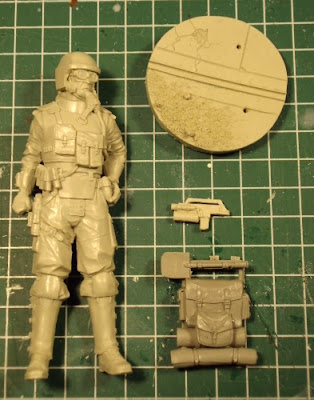 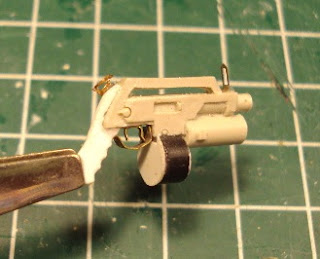 Quite early on I decided to do something extra to the figure, besides detailing it. His stance really lends itself to him holding a dog on a leash! That would mean that hs weapon would not be held in his right hand, so it needed to be completed by adding grip and trigger arrangement. And while I was at it I also added some forward sights and a drum magazine. Looks much better than the tiny, flimsy standard magazine. 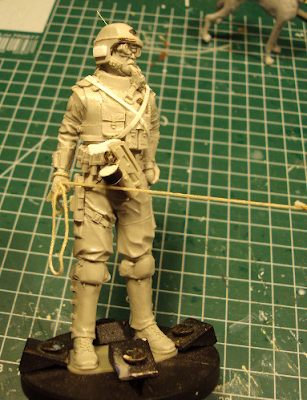 I then started adding some extra details to the helmet and chest first. Some badges were required as a unit identification. It is a small disk with extensions to the sides and the nr.8 added. 8, because that is not a number regularly seen in military units and/or modelling. 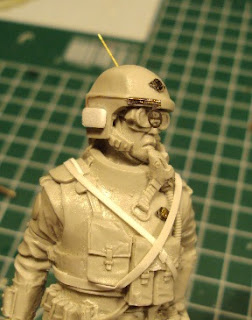 A batteryunit, an antenna and some wiring were next and I added some extra optics using p.e. intended for a 1/35 taillight. All p.e. is from the sparesbox or scraps. 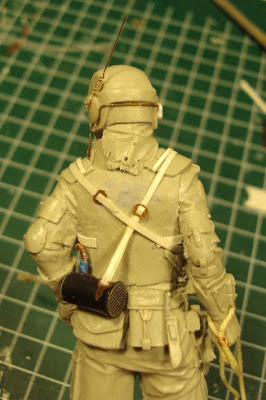 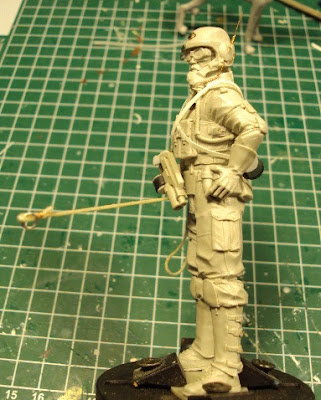 The rear needed attention too, since the figure had a hose running from the facemask down and toward the back. But there wasn't anything anymore, because it obviously was meant to "attach" to the backpack and that one I wanted to leave off. So an airfilter had to be made. A piece of tube, a meshscreen and 2 pieces of copperwire made up the lot and connected to the original hose.
Some buckles and straps and that was that...
As said I wanted a dog to go with the figure and I started searching the net.... Couldn't find anything untill, through the planet figure-forum, I was offered one by Gary of  CGS Military Figures.... free of charge!!

It was a doberman in 1/16th scale, since at that time I still thought this figure was compatible, even if it was a little small. But when I got the dog the difference in scale became all too apparent!!
Nevertheless I proceeded and such a fierce guarddog needs to be kept on a leash. At first I thought of using a small chain, but thought that was too dramatic. A lowcost solution, but in the model and in real life, would be to use a rope.... And so did I. I hollowed out the fist a little and fastened the rope and a loop. The cyano-glue affected the rope, causing it to warp, but I think that gives the whole thing a less static appearence.

The general idea;
the image actually distorts the proportions even more, since the dog is more in the forefront. 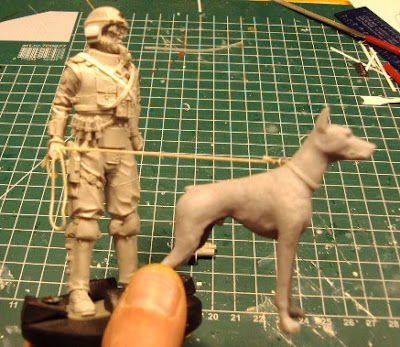