According to Wikipedia: "The story is set 880 years in the future. Events primarily take place between the years 2882 and 2886. A nuclear World War in 2807 destroys most of Earth's population, and renders the planet uninhabitable. About 50 years after the destruction, the Galactic Federation (details unknown) sent an investigative team to determine the condition of the planet. They discover the planet has restored itself to a natural paradise and begin the process of sending colonists to populate Earth. The colonists prospered on the reborn Earth. Cities and towns are eventually reformed, but this growth attracts the attention of criminals, AWOL soldiers, political criminals, mercenaries, terrorists, and other people who had decided to leave civilized society, who began to make their way back to Earth as a suitable place for refuge. The Colonists had no real form of government to deal with the problem other than a few local militias.
The GF, concerned about the civil unrest and the Colonists forming their own independent government, gave the Strahl Democratic Republic (SDR) the right to govern the planet. The SDR's hard handed tactics to restore order; travel restrictions, hard labor camps for the unemployed, etc., created great resentment amongst the Colonists. The Colonists create the Earth Independent Provisional Government and declare independence from the Strahl Republic. The SDR immediately forms a puppet government and attempts to quell the uprising. The wealthy Colonists hire the mercenaries to form the Independent Mercenary Army. They attack the SDR forces and the war for independence and the control of the Earth begins."
Here is the Mark 44 Ammoknights armor suit kit with figure and lots of nice details. As I understand it, this kit isn't new, it was previously released as kit 64107 and discontinued, now released as kit 64007. This particular design came from Robot Battle V anime series and has fixed and smartgun armament. This kit is molded in light gray styrene and presented on nine parts trees plus one tree of clear styrene, two trees in tan styrene, and one tree of black vinyl parts (duplicate parts not shown).
Among the features and options in this kit: 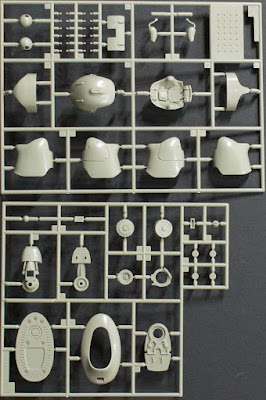 well, my own findings.....
Light grey plastic sprues for armor, a creamy colour on the figures, one sprue with clear lenses and a large decalsheet. Casting quality is good till very good. My kit had no flash and no moulding lines.
I have no previous experience with Hasegawa models or this genre, but I must say I liked what I saw. Lots of details, especially on the interior. Standing figure is good, torso however is a bit vague and soft on details. It shows its age.
There are a few things, which I did not like appearance wise, but that is personal taste. The smoke grenade launchers on the head look...off. The second thing is the gun, the gunbarrel to be more precise. It is tiny!! A machine like this need more punch. And last the feet or the extensions really. I called those the slippers, since I thought they looked like that.
Anyway I got real triggered and itching to have a go at this one!!
Upplagd av Ron kl. 19:28