Like I mention in the first post, I saw this model more as e representation of a hovering vehicle then an aircraft. One of the things that almost immediately made no sense to me in that matter, was the very low position of the maingun; a gatling-like piece of hardware.
But before I got to that, there was some regular work to be done.
First things I did was to put together the engine, consisting of 2 large halves and 2 smaller pieces. This needs to be done before you can add it to the model and construct the hull.
Then I did the cockpit and figure. The figure is torso, 2 legs of 2 halves eachm 2 arms and a head. Choce between bare face with flight cap or helmet. Initially I went for the bare face, but switched to helmet later. The idea behind is that in order to check weaponsystems for proper functioning, the pilot woild need the helmet. And I skipped painting the face......
There also is an empty bay in the front with a hatch that can open. So of course I wanted it to be open! But "empty" really menat empty! There is nothing between pilot and front, so I needed to add a bulkhead and some hardware. The front of German radios as some form of computer, a Tellermine as coolingfan plus the back of a 88mm shell crate as other doodah's. The enginetop of a 1/24 car served as gapfilling connector. Plus the obligatory copperwire.... 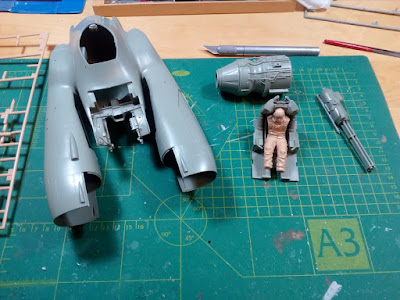 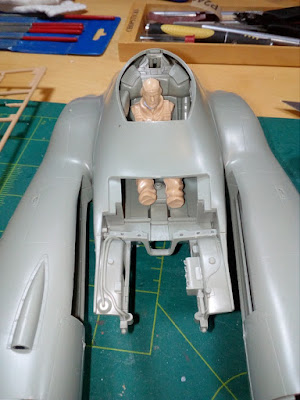 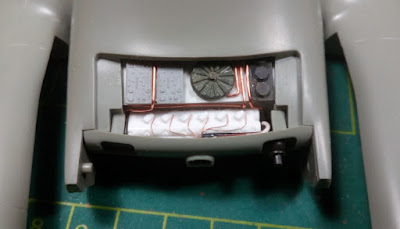 Then the gun!
Because I redefined this craft as a hovering vehicle instead of a flying craft, I figured the very low position of the gatling gun was not logical. Originally designed to hang under the centre frame. So it needed to be repositioned much higher up. And I wanted it to swivel and tilt! Why chose the easy way, when you can create hell. But I managed!
the top got an extra part as a laser rangefinder, the right side the pivoting point for vertical movement. That one's made up of a sprue bit, fashioned to shape, the muzzle of a 1/35 PaK40 and a Pz.4 wheel in the same scale as foot and base. There's also a piece of sprue as an axle in there. The grey bits are spares from the Ammoknignt kit. 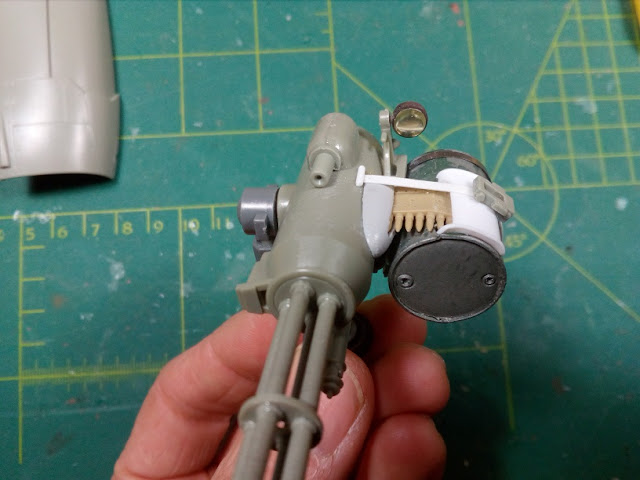 This will be the gun's new position. The very base of it is a 1cl measuring spoon, that had broken earlier.... ;)
At this stage I added some details, like antennae and a sensor to the dome. 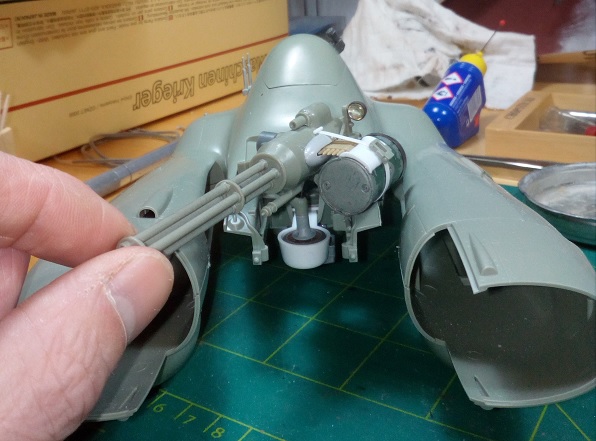 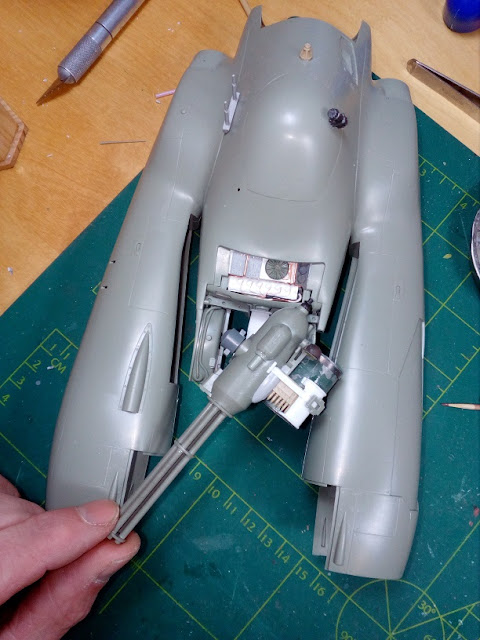 There is something odd with this model.
Here's the front. The front has 2 fenderlike shapes with cables and fillingcap, to which some equipment has been moulded or needs to be attached. To the bottom of right one the gun needs to be attached and to the left on some cilinder. But the cables and fillercaps make no sense as there is nothing underneath! So I will change those into tanks for some fuel or another. This means adding an extra side and bottoms. The marked sections were trimmed off for that purpose. 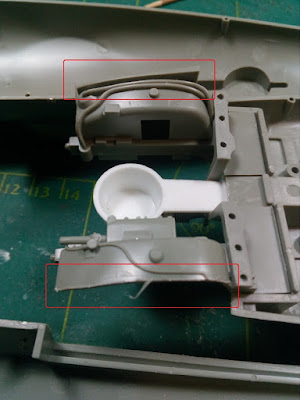