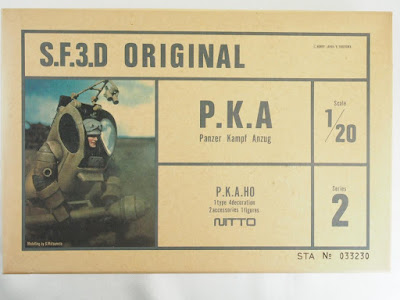 The Falke-project has been put on ice for the time being, due to lack of inspiration. Instead I went for another project in the Maschinen Krieger-theme, but a much smaller one; A single person armored suit in the form of the PKA-kit.
Now this is an older kit, coming from Nitto and it showed in the fit. Not as good as Wave, but still acceptable and with a little care and filler it will turn out ok still. However much of tjhe detail is (very) soft, like the pilot's bust. A typical example of 70's casting, strongly resembling Tamiya's from the day. Quite early on I decided to do something different with this one, based on the figure's helmet, the clawlike hands and some modeljunk I got. This one was to become not a fighting machine, but a sort of combat engineer. And a Swedish one at that! To top it all off it will be one in a winterlandscape, possibly with trees and boulders.
To the bust I added extended domes for earpieces, cables and a microphone. I scribbed out some edges along goggles and other parts to try and lift the detail, but the plastic was not really cooperating. It is not as workable as I wanted. 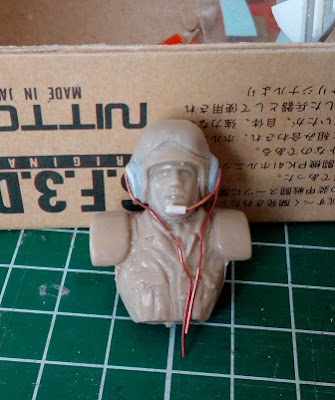 And a heavy armored suit would quickly sink away in the snow, so it needed specially adaptations for such circumstances; snowshoes!  Made from Airfix 1/32 soldierbases and evergreen. 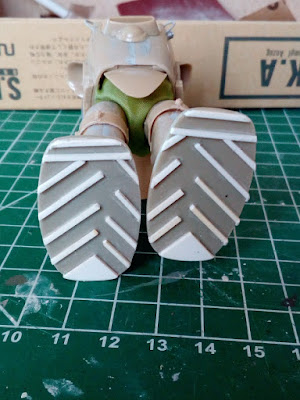 In these pictures you can see that the suit got pants too. I used cloth from a derelicted umbrella to hide the massive gaps in the groinarea. The texture of the cloth does represent canvas in this scale quite nicely and permits movement of the legs, when deciding pose and position in the final diorama. 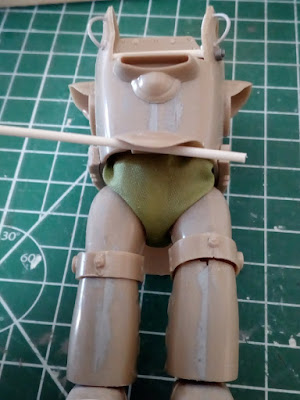 I added all sorts of bits 'n bobs to dress up the suit, ranging from 1/35 WW2 german kit to cables, airplane parts and Ma.K. spareparts.... and of course more evergreen. 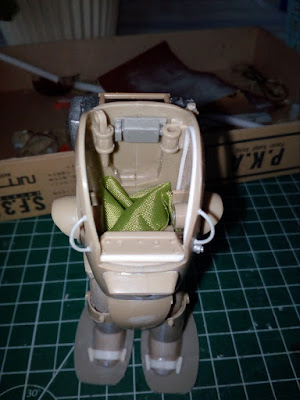 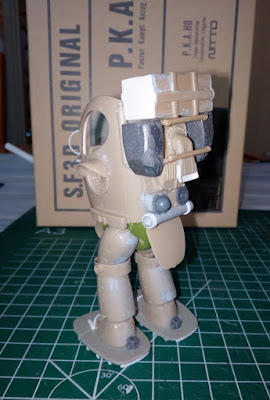 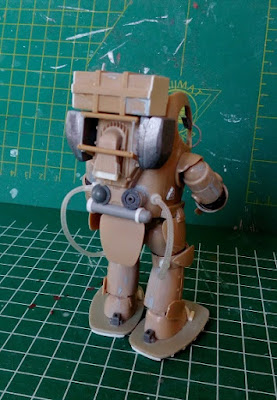 I cut the armored plates that go over the thighs in half. They are too big, hinder the movement of the legs and sort of ruined the overall look. The part I cut off I reused as a guard for the kneejoint, where the hoses connect to the legs. Just a matter of reshaping those leftovers a bit.
The metal boxes are the weights from the Gustav-kit (I believe). 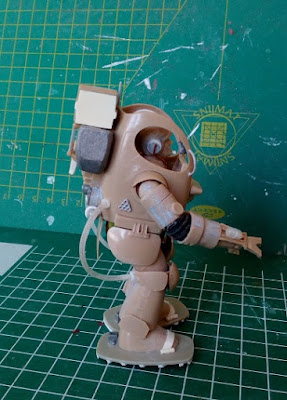 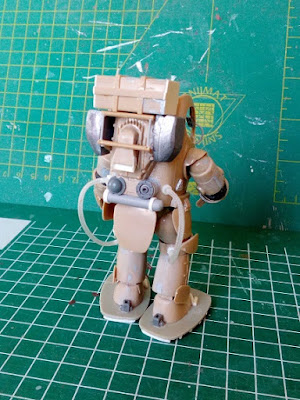 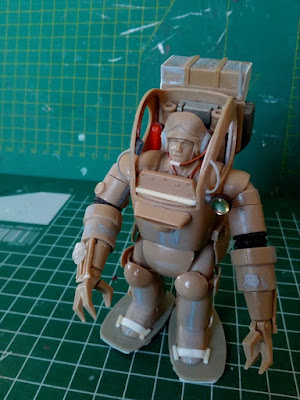 A 1/35 headlamp form a KV-1 tank, some handles (the square one actually is a staple) and a mistake. The right arm has 2 discs and the left arm none. I accidentally mixed up front and backparts for the upper arm, one receiving 2 fronts, one receiving 2 backs. The rubber jointmuff on the left arm tore when adding it, so I was forced to fix the left arm in a bent position later on. 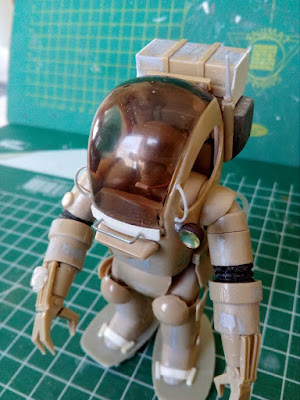