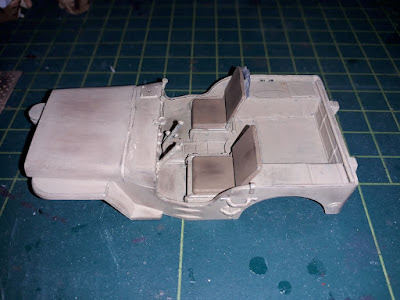 I am proceeding into and with the most precarious fase of any build for me; the painting! 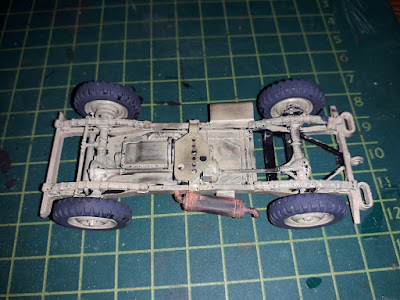 As shown previously I basecated all the subassemblies with Citadel primers from a spraycan and decided to paint the model by hand. Didn't feel like breaking out the airbrush for such a small project and, knowing Tamiya's paints reaction to brushpainting, felt the probably patchy finish might suit a beat up desert Jeep. I got more patchy than I bargained for. Tamiya's paint, allready notorious for bad coverage when brushpainted, did NOT like the primer. It would not stick. It took 4-5 separate layers to achieve a somewhat homogenous cover.
I used one of the previously shown colourized images as a guide and that showed a noticeable differance between the sandyellow Jeep and the sandyellow jerrycans, so I wanted to replicate that. Besides the jeeppaint would fade quite quickly in the desertsun. I blended Tamiya's XF-60 Dark yellow with a good deal of X-2 white and a dash of XF-59 sand yellow, all these paints were actually old stock I still had.
The tires were painted with Vallejo's German grey and I used pencil and an old Tamiya weatheringset, one of those that looks like an eye makeup set, for weathering. 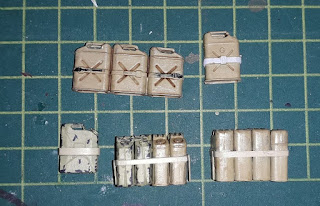 The collection of jerrycans were painted with basic XF-60, but in order to create even more variation I used a sepia wash from Citadel for the British cans and a green one for the German cans. Then I added chipping on the German ones with German grey and drybrushed the British ones with basic steel.
This way everything still sort of looks like in the picture, but some much needed variety in the basic colour was achieved. 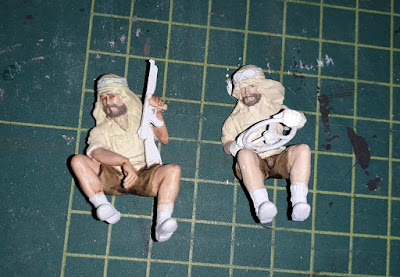 The figures are turning out to be a story on their own. They almost completely lack and definition or detail, so painting them is tricky, to say the least.
I am using a combination of Citadel and Vallejo paints so far, with the skin tone and first wash belonging to Citadel whereas the clothes are Vallejo-colours. These latter dry up to a semi-gloss, making the washes flow into the cavities, but not adhering to the overall surfaces. Which they do with Tamiya-paint, thus altering the very nuance of the paint. I had hoped to get that with Vallejo too..... To bad. Need to find other ways now.